Monitors on an electron beam tube

CRTmonitors (cathode ray tube) are very similar to those with cinexes. They have the same principle of forming a signal – a directed electron beam, falling on the screen, covered with a phosphor causes its glow. This type of monitor allows you to create images with maximum contrast, brightness and saturation. Their disadvantages are high energy consumption and health damage (electromagnetic radiation).

The electron beam tube is a glass tube resembling a large flask with a plug without air inside.

5 – a screen with a phosphor; 6 – electronic guns; 7 is a deflection system

In the narrow part of the tube is an electronic gun, consisting of a cathode, heater and focus system. The wide part is the screen on which the image is displayed.

Previously, the monitor screen was slightly convex, but now all models of monitors are made with a flat screen. The inner part of the screen is covered with a granular substance that emits light during bombardment with its charged particles (these substances are called phosphorous). Different luminophores produce colors of different wavelengths (red, green, blue) or white.

An electronic gun emits during heating a beam of electrons passing through a modulator that regulates the intensity of this electron beam and the resulting brightness of the image. The deflection system allows you to change the direction of the beam.

When a beam of electrons reaches a layer of a phosphor, it causes a glow in the place of the phosphor, which fell.

The electron beam tube of the color monitor has three electronic guns with separate control circuits.

The inner surface of the screen is luminophores of three types that produce the main colors of the RGB model: red, green, and blue.

Since the beam for each color should fall only on its luminophor, a screen, called a mask, with apertures, the size of which is close to the size of a separate grain of a phosphor, is placed in front of a layer of a phosphor.

The most common types of masks in the monitors:

New mask (shadow mask) – Used since the invention of the first colored photocameras. The surface of the cameras with a shadow mask is usually spherical (convex). This is done so that the electron beam in the center of the screen and at the edges has the same thickness. The shadow mask creates lattice with homogeneous points (also called triads), where each such point consists of three luminophore elements of the main colors – green, red and blue – that glow with varying intensity under the influence of rays from electronic guns.

The shadow mask creates lattices with homogeneous points, each such point consists of three luminophore elements (triads) of the main colors – green, red and blue, which shine with varying intensity under the influence of rays emitted from electronic guns. 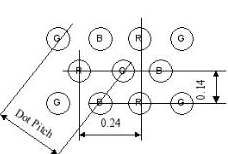 The new mask consists of a metal mesh placed in front of the glass tube.

Most modern shadow masks are made from invar (an alloy of iron and nickel), which is characterized by a low coefficient of temperature expansion. Holes in a metal grid serve as a sight. This ensures that the electron beam hits only the required phosphoric elements and only in the specified areas.

Disadvantages of the shadow mask: This is a small ratio of the passage and delayed by the mask of electrons (20-30% passes through the mask).

The minimum distance between the luminophores of the same color in the adjacent rows is called the dot pitch and is the index of image quality. The dot increment is usually measured in millimeters (mm)

Previous Phase and group velocity of light
Next NUCLEAR PHYSICS